A Lobbyist Registry is an accountability and transparency tool, that the City of Hamilton Council is authorized to employ under section 223.9 of the Municipal Act, 2001. The Registry provides formal tracking of lobbyists and their meetings with Council and Senior Management Teams, with the tracking data made available for public inspection.

OpenPlus was engaged to develop the City of Hamilton's Lobbyist registry. This application was built as a Drupal Feature that was added to the existing City of Hamilton Drupal site following the Continuous Integration methodology that was architected with the City and OpenPlus during a previous engagement. The app was built using many of Drupal's most powerful features such as: Views, Ctools, Panels, Rules and Workflow.

The workflow state machine enabled citizens to create content (profiles and records of lobbying) and submit them for review by the Program Co-ordinator prior to being made publicly available. The rules engine was used to provide notifications of state changes to both the citizen/lobbyist and the Program coordinator. By making effective use of Drupal’s 'power tools', OpenPlus delivered major features with a minimal code footprint ensuring the application was easy to maintain and extend, throughout the life-cycle of the Lobbyist Registry.

The Registry was built to the specifications defined by Hamilton, successfully added to the City of Hamilton's Drupal instances as a Drupal Feature, and went live on schedule on August 1, 2015.

For a copy of a full Case Study on this project, please Contact Us.

A Lobbyist Registry is an accountability and transparency tool. The Registry provides formal tracking of lobbyists and their meetings with Council and Senior Management Teams, with the tracking data made available for public inspection. 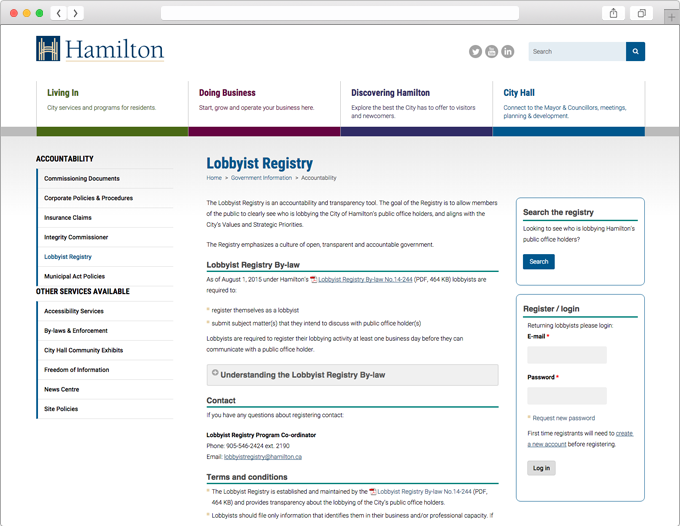 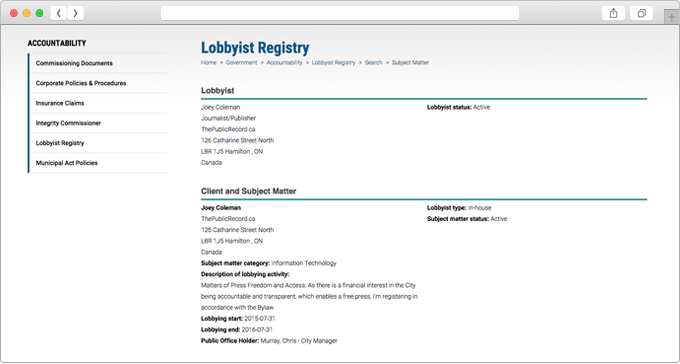 The front-end offers the Lobbyists a clean and clear user interface that shows their profile and all of their subject matters – which includes any that are under review / not published. Active / published subject matters may be modified but only specific fields which do not alter the nature of the lobbying activities.

To support transparency, the front-end interface provides citizens to anonymously search the registry for lobbying activities by keywords such as names, category or by date.

For a full case study on this project, please